At the most basic level thew can be defined as the virtues, principles, or social customs which govern how we interact and behave toward other people. The focus here is not solely on oneself as a solitary individual but on one’s duty and responsibility to the greater community as well.

The first ASH* thews were the Three Wynns, which were originally introduced in Garman Lord’s Witan Theod and later made public in his book The Way of the Heathen: A Handbook of Greater Theodism.

The Three Wynns take their name from the wynn rune and mean the “three joys.”

Two additional thews are Right Good Will and Free Right.

Right Good Will means that members of a community treat each other with genuine respect and demonstrate a heartfelt concern for each other so that relationships are devoid of negative behaviors like gossiping, political maneuvering, hypocrisy, etc.

Free Right, also called Freedom of Conscience, means that members are free to think and believe whatever they choose and cannot be forced to do anything they feel is unethical or immoral. Generally, Heathen belief and worship stresses orthopraxy (right action) instead of orthodoxy (right belief).** 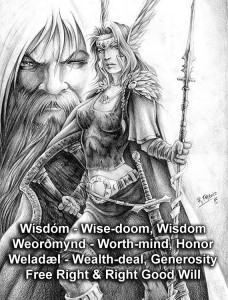 Trow literally means faith or trust; thus, it means the things that we believe in (our faith) and the things that we put our trust in. Specifically, it is the rites and rituals we perform, the holy days we celebrate, the gods we worship, and the ancestors and wights we honor.

*ASH is an acronym for Anglo-Saxon Heathen
** Concept explanation courtesy of Hildiwulf.